Train services across the Lake District and Cumbria

There are only a few train services within the Lake District National Park but there are plenty to surrounding towns & villages which have their own attractions and accommodation or you can connect with the bus network for your onward journey into the Lakes.

There are frequent trains on national network routes all year round, except 25/26 December. Additionally, there are two privately operated Lake District lines, Lakeside & Haverthwaite and Ravenglass & Eskdale, which are popular tourist routes but don’t have many services out of season.

The description of each railway line includes the towns, villages & attractions on route. There are links to each place for further information, including which other Lake District public transport services visit that place. The interactive map shows the railway station associated with each place. The operator of each railway line is included and further information can be found through the operator websites and Community Rail Cumbria. 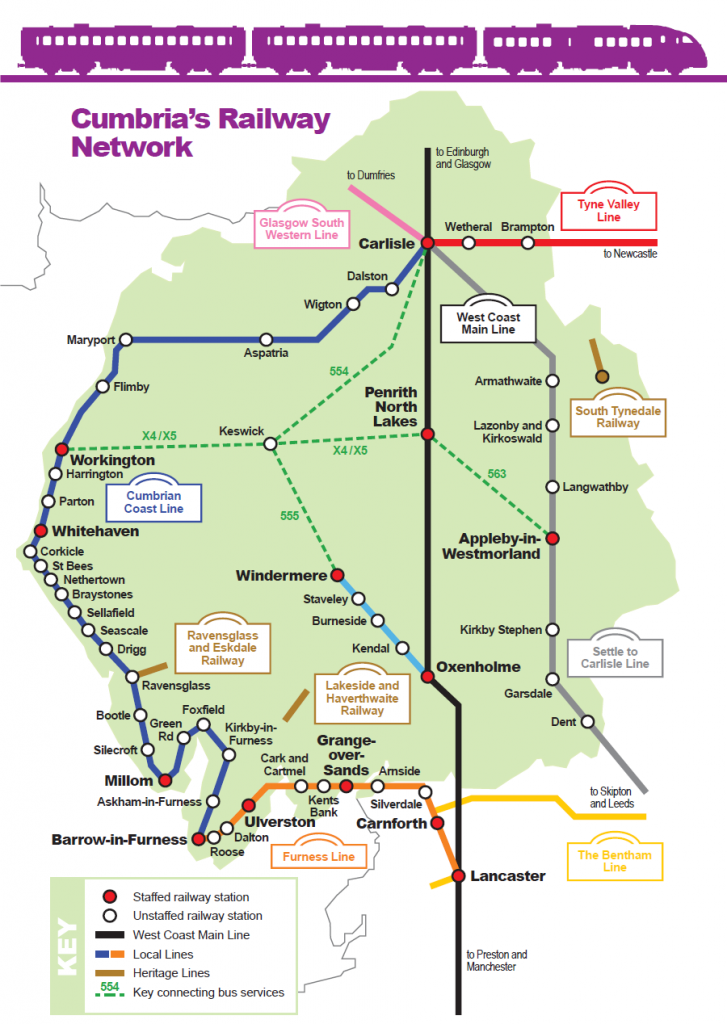 West Coast Main Line.
The west coast main line runs south to north with good connections to many big cities in England and Scotland. Frequent trains daily stop at Carlisle and Lancaster with many also stopping at Penrith and Oxenholme (Lake District). Change at Oxenholme (Lake District) for trains to Kendal and Windermere town on the Lakes line. Services operated by Avanti West Coast and Transpennine Express. Bus services operate from Carlisle and Penrith for onward travel to the Lake District.

Lakes Line.
The Lakes Line provides a picturesque train ride between Oxenholme (Lake District) and Windermere town and is the only national network line in the central Lakes. Frequent trains daily stop at the following towns and villages on route; Kendal, Staveley, Windermere. Services connect with the west coast main line at Oxenholme (Lake District) and some also continue south to Manchester airport. Services operated by Northern Rail. There are many bus services connecting with trains at Windermere station for onward travel within the Lake District.

Furness Line / Cumbrian Coast Line.
The Furness Line and The Cumbrian Coast Line form a continuous route from Lancaster in the south to Carlisle in the north, following the Cumbrian coast much of the way. There is some wonderful scenery making the train ride an attraction of its own. It also stops at many towns and villages along the way including; Grange over Sands, Cark (Holker Hall), Ulverston, Dalton in Furness (South Lakes Safari Zoo), Barrow in Furness, Broughton in Furness, Ravenglass, Whitehaven, Workington, Maryport, Carlisle. Frequent trains daily. Not all trains do the whole route. Services connect with the west coast main line at Lancaster and Carlisle. Operated by Northern Rail.

Settle to Carlisle Line.
The Settle to Carlisle Line is one of the most iconic railway lines in the country, passing through some beautiful scenery, albeit outside the Lake District National Park. The section between Carlisle and Settle is the most scenic, including the Eden valley and Yorkshire Dales National Park. The railway can be used to travel from west or south Yorkshire to the Lake District. There are several trains daily between Leeds and Carlisle, less on Sundays. Services connect with the west coast main line at Carlisle. Bus services operate from Carlisle for onward travel to the Lake District. Operated by Northern Rail.

Ravenglass & Eskdale Railway.
The Ravenglass & Eskdale Railway is an historic miniature steam railway which travels 7 spectacular miles through the beautiful Eskdale valley from Ravenglass on the west coast to Dalegarth station at Boot. Although privately operated on a narrow gauge, it connects with the national network Cumbrian coast line at Ravenglass. There are many trains daily over the summer months, several trains daily at other times between March and November, February school holidays and between Christmas and New Year. Limited weekend service at other times during winter.

Lakeside & Haverthwaite Railway.
The Lakeside & Haverthwaite Railway is a privately operated historic railway with steam trains easing along the picturesque 3.5 mile line through the River Leven valley at the southern end of Windermere lake. The line does not connect with the national rail network but does connect with Windermere Lake Cruises at Lakeside or various bus services at Haverthwaite. There are several trains daily from Easter to November and during February school holidays, with very limited service over the winter.